Game Info Because I can 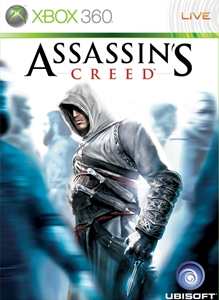 Survival at its best, for over 10 minutes, nothing was able to hinder your flight.

Keeper of the Creed 10G

Visions of the Future 50G

A strange vision has appeared to you. What could it mean?

The Blood of a Nemesis 25G

You've slain Robert de Sable, but there is one more...

Disciple of the Creed 30G

You've fully honored the tenets of the Creed. You are a Master Assassin.

Defender of the People:Jerusalem 20G

The people of Jerusalem will be forever grateful for what you've done.

March of the Pious 5G

Scholars know you well and have helped you over 20 times.

The Blood of a Teutonic Leader 25G

Defender of the People: Acre 20G

The people of Acre will be forever grateful for what you've done.

Over 100 city guards have fallen to your hunt.

The Blood of a Scribe 25G

Defender of the People: Damascus 20G

The people of Damascus will be forever grateful for what you've done.

Desmond and Altair have been completely synchronized.

The Merchants of the land now know you VERY well.

The Blood of a Regent 25G

The Blood of a Liege-Lord 25G

Over 50 people have felt the deadly sting of your blade.

Over 100 people have witnessed your deadly performance with a blade.

You've soared with the eagles and landed safely over 50 times.

The Blood of a Doctor 25G

Nothing can hinder the descent of an Eagle. Over 50 people have fallen to your relentless attacks.

The Blood of a Slave Trader 25G

You remain undefeated for over 100 battles.

The Blood of a Corrupt Merchant 25G

Blade in the Crowd 30G

Like a Blade in the Crowd, your target never knew his death laid wait within his very shadow.

The Punishment for Treason 20G

You have found the traitor and have brought him before Al Mualim.

Welcome to the Animus 20G

The Blood of the Merchant King 25G